I have run the Windows evaluation executable using an SR300 camera. I’ve scanned for a minute and tried a number of different settings, but just can not get a very accurate rendering. Any advice?

The SR300 sensor is meant for short range scanning and not well suited to scan full human bodies. For this purpose we suggest a RealSense D415, D435 or L515. There are some videos on our webpage showing how to best do a full body scan.

Thanks, in our case, we need to be close range because of our mmWave radar working at the same time. If I orbit scanning chest high, It seems to work well, but as I head down towards the floor, it goes blue and never seems to image well in the lower half of any target

Make sure that the whole body is within the volume bounding box. And try to move the camera slowly during the scan.

If you are doing this already, maybe you can also send us a video showing your problem, so that we could better understand the issue.

I am testing the recFusion scanning tool in the hopes we can eventually replace our own human scanning devices SLAM code with the recFusion SLAM. But since our device needs to be no more than 60 cm away for our radar module to work - perhaps we can’t use recFusion if it needs to see the whole body at once? I noticed recFusion seems to work better when I use a 435i camera than with the SR300 camera. I have had times I do a whole scan and it freezes during final rendering. If I make a starting orbit staying at the same height, that is fine, I see no blue. But as soon as I start to move lower, I see more blue than green while scanning 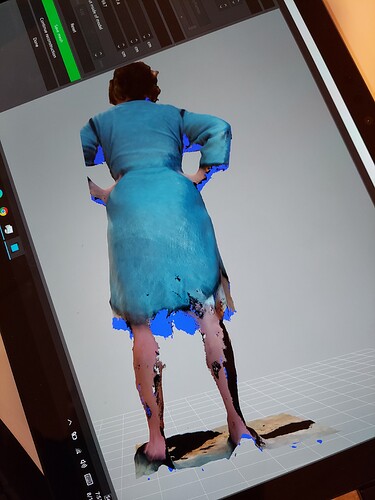 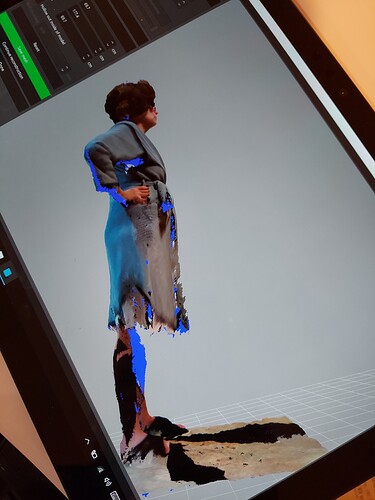 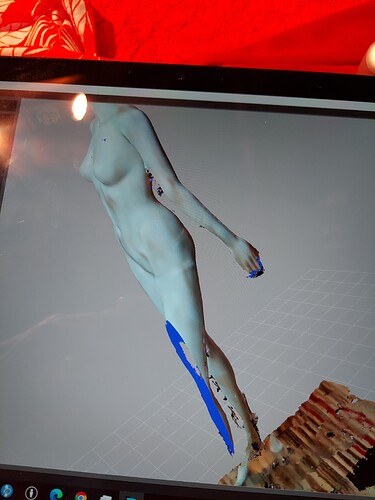 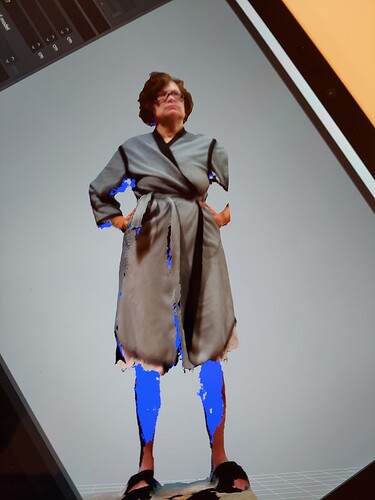 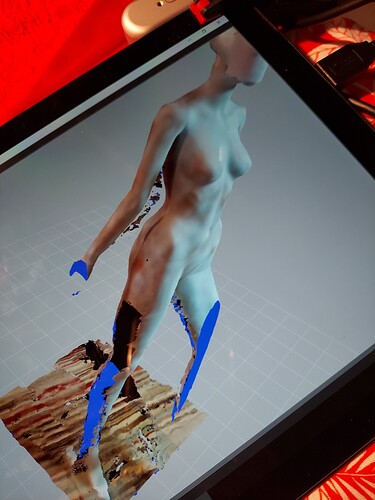 At least in the case of the mannequin the scanning of the legs didn’t succeed because the bounding box was not covering the legs completely (this can be seen by the clear cut). RecFusion doesn’t need to see the whole body at once in order to work, but the bounding box that you set up before the scan start should contain all the area that you want to be scanned.

In case of the person, the issue might be that since the legs are symmetrical and cylindrical, the tracking algorithm doesn’t observe enough of shape variation and therefore tracking gets lost. To fix this, you can either put something next to one leg (like a box), or change the way you are scanning the person: move the sensor up and down, up and down, instead of first making a full upper circle and then the full lower circle

I taped on small objects to the legs in different places to avoid them being confused. I made these videos of my initial settings and the results: 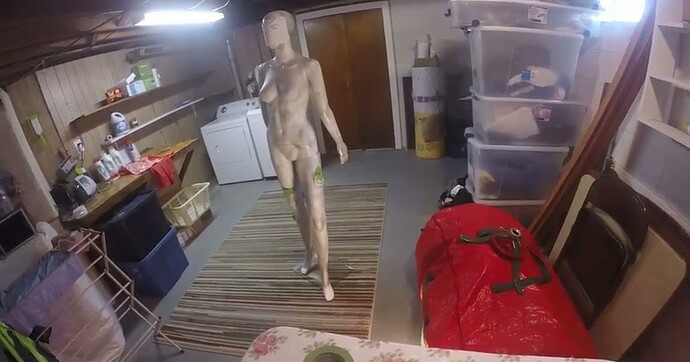 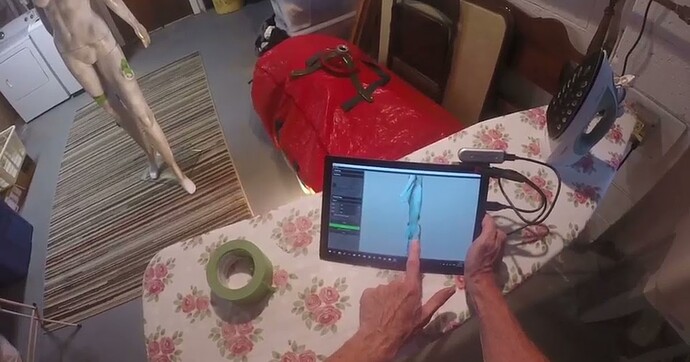 I believe I did not get out of the bounding box. I still have times when the depth camera image goes blue which tells me it gets lost. I don’t know why this would be.

It seems that sometimes tracking gets lost already during the scan of the upper body. When it happens, you should rather return the camera to the position where the tracking was successful instead of taking it further into unseen areas. And only when the tracking is re-initialized you can slowly continue scanning the new areas.

Also, could you please try a bit different trajectory of scanning similar to the one in this video RecFusion full-body scan - YouTube?

That scan was one handed, and went faster and for a much shorter time than mine. When I scanned like that, I got the attached worse results. I tried with a shirt on my mannequin and that didn’t help. Often when I move away from my initial scan place, the whole depth image goes blue. By the way, what is your camera recommendation once realsense cameras can no longer be had? I have a copy of my workspace file available at:
https://drive.google.com/file/d/1991CbaaDhsVneAN1_mYM5rdg38HNqfg_/view?usp=sharing 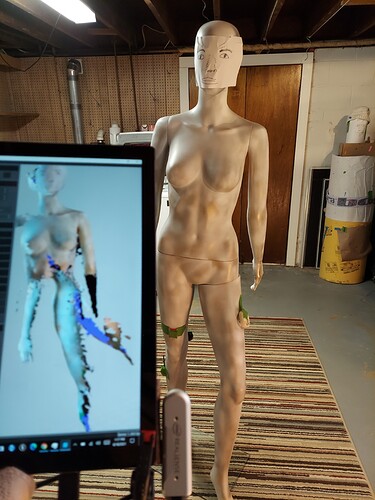 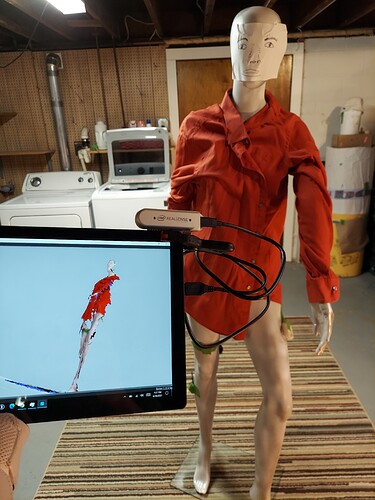 This morning I tried reinstalling the recFusion app, but it still seemed to work worse than it had several days ago. (lately, if I move from one side of the mannequin to the other, it goes blue and is hard to get green sync again). The competitor’s scanning program I’m testing still seems to work ok. I shifted back to my SR300 camera (I last was using a d435i camera) and it was able to scan on all sides without going blue for long periods of time. The scans were much better but still had trouble on the lower legs. 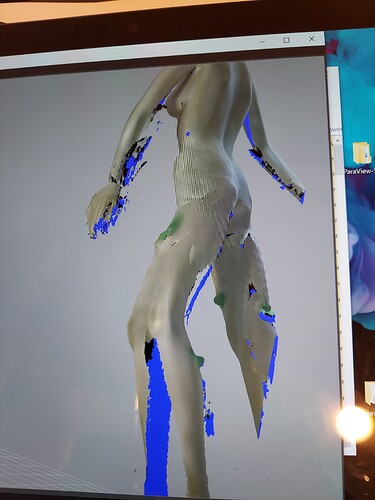 I installed recFusion on my laptop, got an extension cable and made multiple attempts with different settings between attempts. They all allowed the front to be scanned just fine, but would go dark blue as soon as I went around to either side. The final image only had the front. I loaded a competitors scanner app on, and it on the first attempt didn’t seem to have problems. We have a product we hoped to sell a few thousand of each year, I’d like to be able to have more than 1 possible SDK set of SLAM code to possibly update our scanner product with.

Can you please record a sequence and share it with us so that we can check why it is not working?
In the videos showing the tablet it also seems the reconstruction frame rate is very low. I cannot see the exact number from the video but it seems to be a single digit figure. The reconstruction frame rate should be above 10, ideally above 15 for the tracking to work smoothly.
To obtain a higher framerate with the same GPU you need to reduce the volume resolution (e.g. to 256 or lower) and possibly also reduce the color and depth image resolution.
You should also make sure not to move too close to the object, since then no depth data will be recorded by the sensor and the tracking will fail. Finally the strong light sources you have installed might interfere with the depth measurement accuracy of the sensor.

I recorded a goPro video of my set up and me doing a scan and have a link to the video in googleDrive, sorry, I’m hard to hear. I have two pictures of set up parameters. I started with just the defaults after reinstalling recFusion on my windows laptop - except I changed the box size and starting points to allow scanning a tall mannequin that I added a few reference points to. I did this in a basement with many added lights. The default frame rate is 30, but it also failed to see the backside when I moved the vision and depth camera frame rate down to 15. Were you saying I have to lower the pixel resolution to 256 mm? I found it had trouble scanning (turned blue) even when I was around 60 cm from the closest body part. I found when I rotated the back side away from the brightest lights, it still had trouble. When it goes blue, does that mean the depth camera fails? I have no incandescent lights shinning on it (I assume tube and LED lights don’t throw out much IR) the target surface temperature is 24 degrees C. I am using a d435i camera and have the same trouble with the SR300
the video is at:
https://drive.google.com/file/d/1BDREzy3QwK1RF-jLfpeNdO430ulnZVTa/view?usp=sharing
close up pictures of settings: 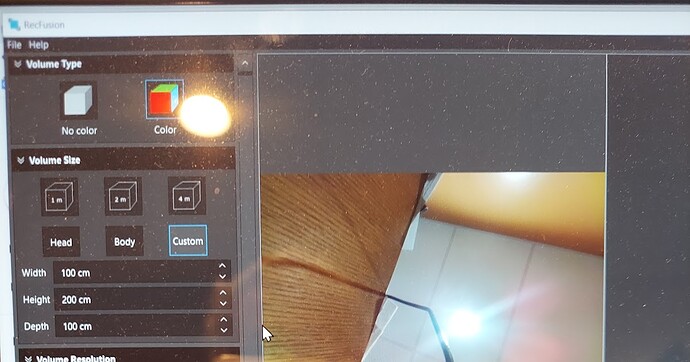 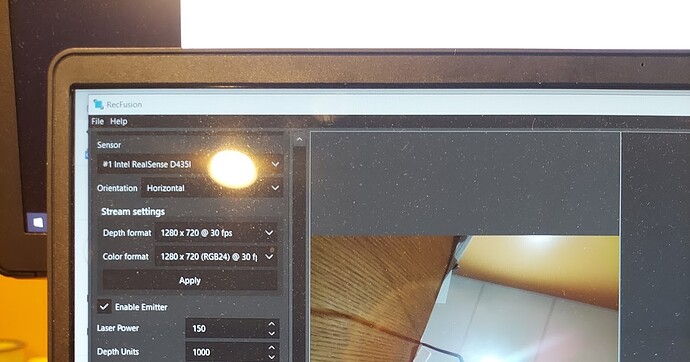 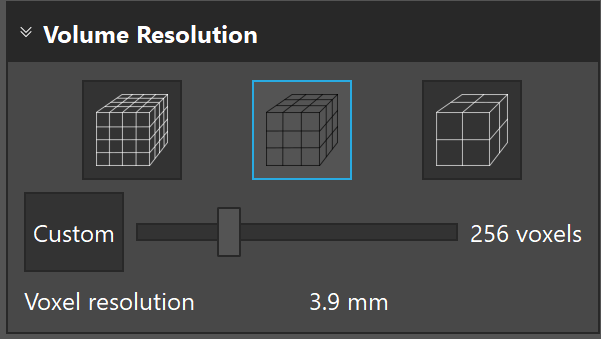 When the depth image turns blue, it means that the tracking is lost. The grey areas show the places where the depth measurements are missing. If you come too close to the object you will see more of such grey areas, that is what you need to avoid.

Could you please try to record a sequence and send it to us? Then we can analyze better.

I gave that a try. If anything, It looks worse. I tried at around 4mm and also the lowest it would let me. Still goes blue if I move from front to either side.

Sorry, I made a typo in the previous comment. I meant reducing volume, not the voxel resolution. So you need to try a coarser value, for example around 1cm

right now, I have a volume of 2m x 1m x 1m, when I used to have it a little smaller, I still had trouble, but I would have problems of it truncating the mannequin I am trying to scan. So a scanning program needing a much smaller target just would not work for me.

You can leave the volume size as it is, you just need to change its resolution, i.e. increase the value here: