Hi found this at Microsoft, maybe it might help with Recfusion? There is even white papers. 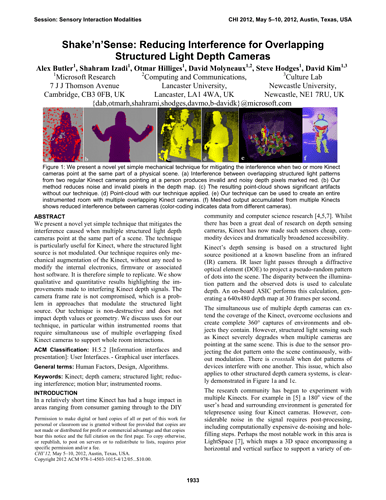 PDF | We present a novel yet simple technique that mitigates the interference caused when multiple structured light depth cameras point at the same part... | Find, read and cite all the research you need on ResearchGate

What is proposed here is a hardware-based solution which would add vibrations to the sensors in order to blur the IR-pattern for other sensors observing the same scene. This is something which cannot be done on the software side and it would also result in undesirable effects such as potential motion blurring and a less accurate registration of multiple cameras.
To reduce interference you should make sure to have as little overlap as possible between the sensors. You can also write custom sensor access code with the RecFusion SDK which will synchronize the lasers of the sensors. This will however significantly reduce the frame rate.